I feel just like Georgia looks in this photo: (in her Zooni hat) 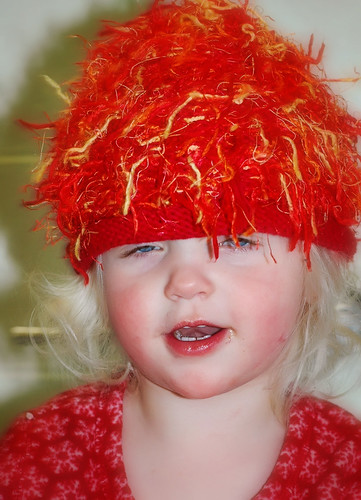 NO, NO, NO — not drunk and disoriented!

I forgot appointments, and I was late for pretty much everything.

OH, while walking from my bedroom to my kitchen in a tee shirt and panties, some potential customers (not any more they’re not) showed up at my front door (which as a huge window) and saw me walking half naked around my home.

I was hoping they were JW’s, who would sense that it wasn’t a good time to share the message, BUT, no such luck! They waited and I eventually had to pull on my jeans and face them at the door!

They had come to look at cloth diapers, they called (a number that hasn’t been in service for two years) and when they couldn’t get through, they just popped on over!

I hope Psycho-Powder-ARSE, doesn’t get the same idea.

I am going to make it an early night. I’ll see you back here tomorrow … right?