If you’ve been reading Mommyknows.com for a while, you’ll know we walk to school, regardless of the weather. This isn’t that much of a hardship in the fall and spring, but in the dregs of winter, it can be painful (really painful).

The two older kids are now in a special sports school in the city, so they’re exempt from my walking fun. That leaves just Georgia and I plodding along. Georgia being five and having just started school doesn’t realize, she’s on a seven year walking program. She hasn’t excepted that her whining all the way to school and all the way home again isn’t going to change my mind. Every morning she points out that we have a car just sitting there waiting to be driven and every afternoon she’s grumpy with me when I show up on foot rather than with the car. If she’s anything like her brother, the whining will go on until well into grade three, maybe even four (*SIGH*).

Due to the rain and cold Ole Misery Guts Georgia was even more miserable than usual when I picked her up. I soon pointed out that there were a lot of great puddles to walk through. Gutters to stroll along. 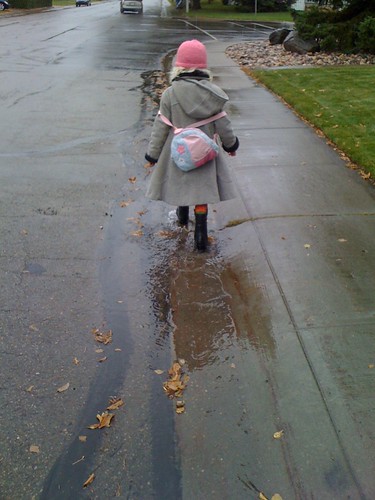 The whining stopped nearly immediately. We floated some leaves and sticks down the gutters and watched them disappear down the catch basins. 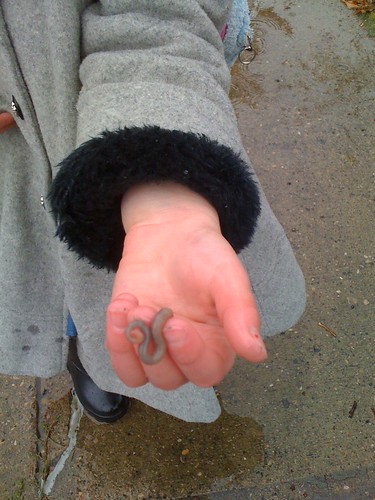 She saved a worm or two from drowning, by picking them from the watery gutters and putting them in nearby flowerbeds. She did some stomping and some splashing and eventually a whole lot of smiling. 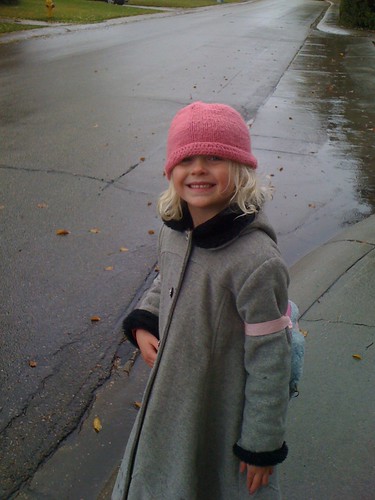 Excuse the photos — they were taken with my iphone.

Next post: Real Food (Sort of) – Fun and Easy Snack Idea – Make Your Own Trail-Mix

Previous post: Real Food – A Burger & Fries (the way they were meant to be)