Dustin Paxton – The Police ‘GOT HIM’! I Got Him to Fix my iPhone 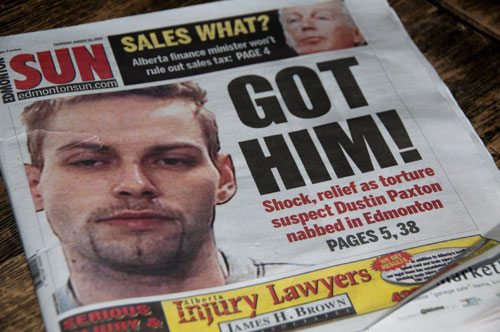 Have I ever mentioned that I love my iPhone? Well I do, enough to venture into a stranger’s basement suite to get it fixed when Apple tries to rob me of $229 to replace a piece of glass worth less than $5 (I know it’s worth less than $5, because I purchased one from China!), however, I am getting off topic.

Last Friday afternoon after the attempted rip-off at Apple I tweeted:

Please note the part where she so rightly tells me –> (just make sure “authorized”). I didn’t listen, I never listed, just ask my mom.

Seeing as I had a 1 cm hole in my phone and I wasn’t willing to pay $229, I decided it was a grand idea and Googled –> Edmonton iPhone Repair.

I dialed the first listing that came up –> iEnstein iPhone Solutions. He quoted me $60 and said, I could head right over. I did have a twinge of worry on the way over, he wasn’t “Authorized” like Antof9 had suggested, but then figured, “who the hell cares, it’s $60 and the phone is useless to me right now”. I figured the worst he could do was ruin the phone, and it was already ruined.

I have to say, that at this point I was a little bit leery, but mostly I was picturing a teenager fixing iPhone screens for spending money (he’d sounded very young on the phone), and went ahead and rang the doorbell.

As I stood on the front step waiting for the door to be answered, the gate to the backyard opened 6 to 8 inches and a man who looked to me to be in his late 20’s early 30’s poked his head around and asked me to come around the back. I went as far as the gate and stopped. I can’t tell you why exactly, but I was uncomfortable. I didn’t want to go around the back of the house with him. It wasn’t the way he looked. He was neat and tidy, sort of handsome. He wore clean, ironed clothing. He was friendly, but it felt wrong.

It’s hard to explain, but he looked like life hadn’t been easy for him, like he was living rough (even though he was clean, neat and polite). I noticed his teeth were quite decayed, it didn’t jive with his clothing and neat haircut.

He may have sensed my hesitation, because he said, “You can come in and watch me fix it, or you can come back in 20-30 minutes.” I was relieved not to go in, and relieved not to have to explain that I was uncomfortable. His landlord came out of the front of the house just as I was leaving. Dustin introduced him and then, Georgia and I left.

We returned about 30 minutes later. The landlord was in the driveway chatting with a neighbour in the next yard. I parked in the driveway, got $60 from my purse and locked Georgia in the car. I wasn’t really worried anymore, but I wanted to get it over with and I still felt like I shouldn’t take Georgia in the house with me. I was happy to see the landlord.

The landlord was chatty, and insisted I go on down (to the basement). I was torn, do I leave the kid in the car, do I bring her in? Just then, a pretty young woman came up out of the basement, wearing a medical scrubs (like a dental assistant or nurse). I recognized her from my dentist’s office. I assumed from their friendly tone (wrongly assumed –> she’s married), that it was his girlfriend, and I totally relaxed and told myself I was being silly. I went down into the basement and watched JP (Dustin Paxton) finish fixing my iPhone. His suite was super neat, very clean and sparse. Even his tools were in neat rows. I noticed that as he used each one, he put it back precisely in it’s row. I remember thinking, that if I were that disciplined my house wouldn’t always look like a hurricane hit it.

He was friendly and smart. We chatted about SEO, and Facebook. I told him I’d recommend him to my facebook friends. He promised to treat them as well as he’d treated me. I chided myself for being so spooked earlier on!

This morning when I took my boy to the dentist, Cathy the pretty dental assistant who was coming out of the basement before me filled me in on our friendly neighbourhood repairman.

Before and after pictures of the victim Dustin Lafortune: 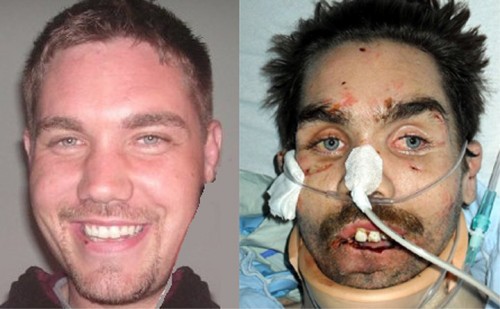 Dustin LaFortune before (left) and after being dumped at a Regina hospital in April. Photograph by: Facebook/Screengrab, Facebook

I’m horrified that I sat and chatted and laughed with a man who may be responsible for something like this. Then again, I am relieved that I ‘knew’ something was wrong, that my ‘gut instinct’ works. I am determined that from now on, I’ll listen to that ‘gut instinct’ and not battle with myself to silence it.