The trip has been good (mostly). The kids have been content to enjoy the scenery, watch movies, play DS and nap. I have one major rule: NO CRYING or CATERWAULING.

Everyone has followed ‘the rule’ to a tee. Well, Georgia has had one or two minor infractions, but really they were so short-lived they aren’t worthy of more than a mention. Oh fine, I’ve done a bit of caterwauling myself, but like Georgia’s it was minor.

About 50 miles north of Helena, MT we heard a HUGE ‘BOOM’. Mr. MK quickly pulled over and we discovered that the back passenger tire was REALLY, REALLY flat. 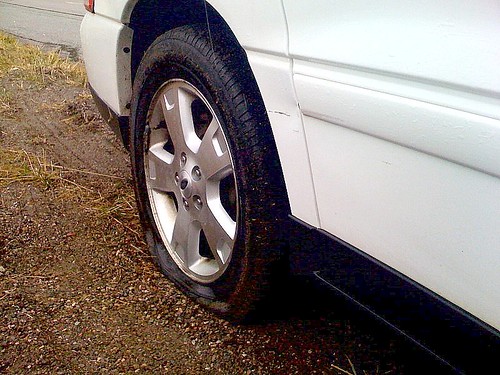 Taken with my iphone.

I was happy to NOT be a man (generally, this is always true) while Mr. MK, was out in the rain/sleet kneeling in the mud of the soft shoulder fixing that tire. We spent several hours at the Helena Wal*Mart while a new set of back tires was put on the van. Off we drove, not too stressed, but several hundred $’s poorer and several hours behind schedule. On a more positive note, the kids enjoyed the toy department, lunch at Subway and they each had a new movie.

After seven more hours of uneventful driving and just 2 blocks from our hotel in SLC, the van started to shake and shimmy. Again, we pulled over. The same DAMN tire was flat, and for the second time in 12 hours poor Mr. MK was out fixing a flat. This time (it wasn’t raining and he was NOT happy) I helped out by holding up the back door of the van for him. Poor guy, he shouldn’t have to do everything! I also thought it was a bit too much of a coincidence that our brand new tire would be flat, due only to bad luck. While Mr. MK put on the spare, I inspected the ‘new’ flat tire and rim. Mr. MK found this VERY annoyoing (what would I know right?), but I did find a hole in the aluminium rim of the tire, and as it turns out, it is the culprit.

Mr. MK’s was out 7:30 this morning, Wal*Mart replaced the 10 hour old tire. They were in the middle of mounting it when Mr. MK pointed out my ‘rim puncture’. He had called me, to tell me the tire would be fixed shortly, I asked about the puncture, because I wanted to make sure it was safe. Once he pointed it out to them they confirmed it wasn’t safe. They then couldn’t or wouldn’t fix the tire/rim and proceeded to tell us how impossible it would be to do on a Sunday in SLC.

However, the lovely front desk clerk at Homewood Suites by Hilton after listening to my ‘Road Trip Blues’ late the night before, recalled her roadside tire disasters and said if we weren’t successful with Wal*Mart we should try her ‘tire man’, an apparent life saver. She was right. I spoke with the Glen the Tire Genius and he said, “come on over and I’ll get you back on the road’. No maybes, no it’s Sunday, no I’ll see what I can do’s … just “come on over and I’ll get you on the road”. That’s exactly what he did!

I’ll be doing my NaBloPoMo thingy all during the holiday. I’ll also be twittering the road trip away –> follow me on twitter @ http://twitter.com/mommyknows.

All comments and back-links for this post will be entered to win a $10 Starbucks Gift Card (includes shipping and handling) in my ‘Have a Coffee on Me’ Contest. If you comment and blog about the contest you’ll receive two entries (too easy). I have a whole ‘schwack’ of Gift Cards to give away, so make sure and come back often for a chance to ‘have a coffee on me’.

Next post: You Spin Me Right Round Baby (coffee contest continues)