Not to Be Forgotten …

Aren’t you happy Halloween is over? I’m not really a Halloween lover, it’s a lot of fuss for Candy. I do remember how much I loved it as a kid though, and I try not to be a ‘Scrooge’!

This year, I decided that the kids could be whatever they wanted, only rule … we weren’t buying any costumes or expensive supplies.

You saw Lizzy’s Headless Marie Antoinette (she won first place at school … YAY!). We did have to buy some spray foam and duct tape for this one, otherwise this was totally made from stuff around the house.

**EDIT: Lizzy’s Costume has been chosen as a finalist in the ScanDigital Halloween Photo Contest — to vote you just have to click on the ‘like’ link under the photo (it’s on facebook, so if you are a member there is no sign up … just one click) or go here: www.facebook.com/scandigital – Thank you! **

Sam decided to be a hobo. He did his own make up and used old clothing etc. I sewed some patches on his shirt for him. 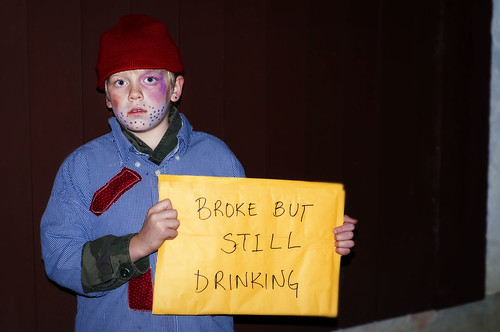 His costume was inspired by one of my favourite bloggers –> Broke but Still Drinking. Read his blog, he is hilarious.

I was a hobo pretty much every Halloween of my childhood. Hmmm

Georgia as always was a little bit more difficult. For several weeks, she told anyone who would listen that she was going to be a ‘fashioner girl’. What exactly a ‘fashioner girl’ entails … we’ll never know. She changed her mind and decided to be a ‘witch with a dog’. Lizzy dug the witch dress and hat out of the dress up box for her on Friday for Sam’s school Halloween parade. It lasted about 3 minutes … she went ape-shit … apparently the witch dress is itchy and the hat covers her eyes. She went to the parade in an ‘I <3 NY’ tee and a ballerina tutu.

Halloween day she decided she’d be a black and white dog. That was fine, she had a clean pair of black pants and tshirt in her drawer and I planned to draw her a puppy face. Screw the ears, I was tired of her changing her mind.

Over supper, she started talking about how she was going to be a ‘girl who was scratched by a lion’. WTF!? Fine! Who am I to squash the dreams of a 4 year old diva child? 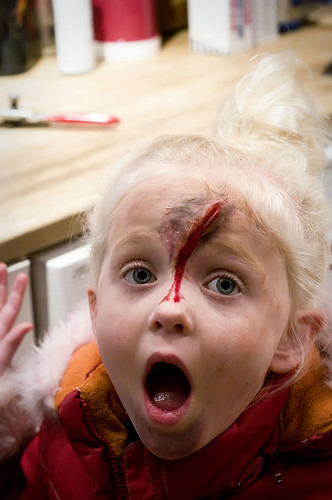 By this point, she was lucky I didn’t scratch her myself!

Her Dad took her trick or treating. I didn’t have the courage! Apparently she told the neighbours she was a ‘scar victim’.

Did I mention I am happy it’s over?

NOTE: I’ve been having trouble with the comments. If you can’t comment PLEASE let me know at kim (at) mommyknows (dot) com. Thank you!