Georgia loves wee plastic animals. She’s an animal nut in general. The Easter Bunny brought her a tube of plastic farm animals (the rabbits getting cheaper and cheaper) and with it was a small plastic play mat. She loved it and call it her map. Unfortunately, it lasted about 2 days. 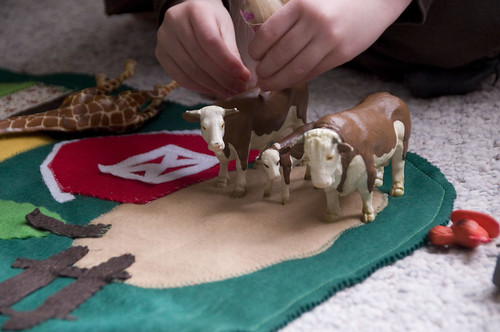 It got me thinking about creating a longer lasting version from felt. I searched the internet high and low looking for some ideas, but there is very little out there. I decided to make it up :) 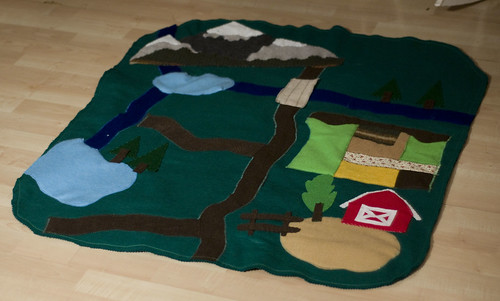 I started with a very large piece of green felt. I bought this green felt for a girl guide craft (15 years ago) that never came to fruition. I just knew it would eventually come in handy.

Next Georgia and I chatted about what she might like on the ‘map’. She wanted a farm and a jungle, and I had visions of mountains and a lake. I suggested some highways, she wanted dirt roads. 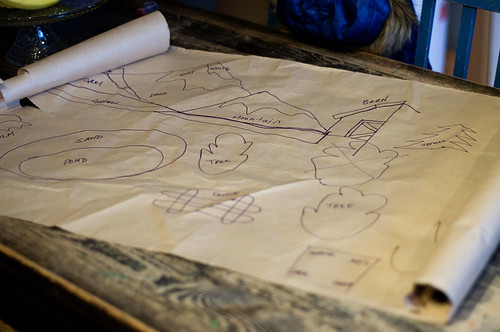 I drew a rough version on brown paper and then drew some rough paper templates. As you can see you don’t need to get fancy!

I cut out all of the shapes in felt. I have a bunch 8.5×11 sheets of felt from Michaels and the Dollar store around to use for most of the shapes, but not the right colours for my mountains. I was determined that this ‘map’ wouldn’t cost anything, so I used some felted sweaters that I had left over from a previous craft project for the mountains.

The mountains were created using large blocks of colour. I cut out the various pieces and then pinned and sewed them together using a LARGE ziz-zag stitch.

I wanted the barn to be a uniform shape, but didn’t have a pattern. I drew a 1/2 barn and then folded over a piece of fabric and cut on the fold. Tada … a symetrical shape. 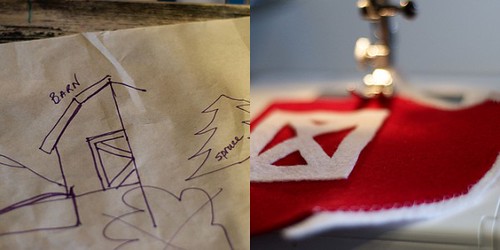 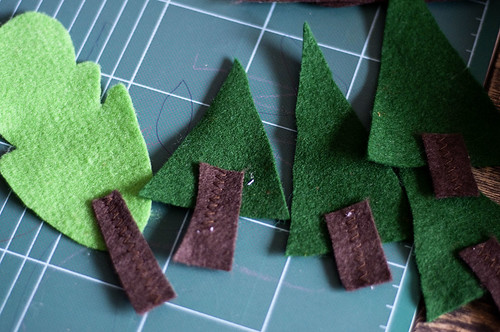 I wanted the roads and rivers to be a uniform width, but I didn’t want them to be just straight lines. I taped two sharpies to either side of a cordless screwdriver and then drew out strips of road and river on brown and blue fabric. A girls gotta do, what a girls gotta do. 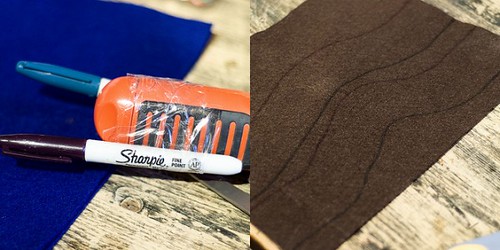 Once all of the shapes were cut out, we played around with placement for awhile, once satisfied I started sewing pieces together starting with the rivers, then the roads. 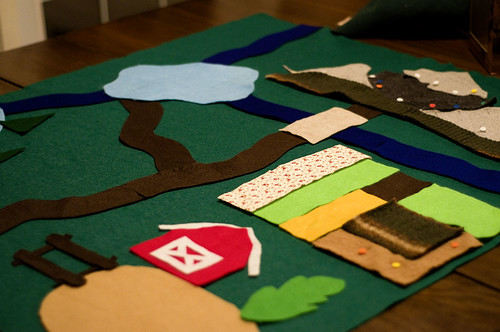 Georgia especially loves to play farm, I wanted the scenery to be somewhat similar to our Alberta landscape, and if you’ve ever flown over the Alberta prairie it’s like flying over a patchwork quilt in browns and greens and golds. I used several pieces of scrap felt and one flowered fabric to try and replicate that behind the farm.

Once all the features were sewed together I started sewing them down on the large green backing. I started with the rivers again, then the roads and lakes and then the finishing shapes. I sewed the mountains on last. Most the the features were sewn with the machine using a zigzag stitch but some of the shapes (trees and barn) are beyond my sewing ability and I used liquid stitch and then sewed them on by hand. 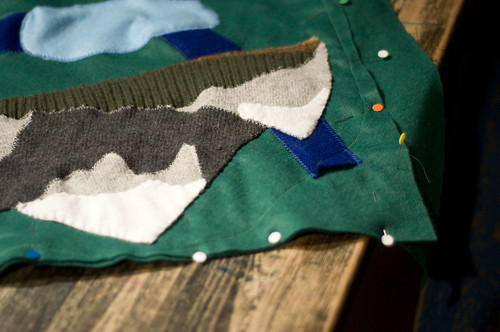 I decided to put a backing and because I had so much green felt left over I decided to use that. At this point I realised that neither of the pieces (front or back) was square. The edges weren’t lining up very well … (CRAP)! I decided that rather than trying to make a perfectly square lines, I’d just sew the two sides together free hand and then trim the edges with pinking shears. 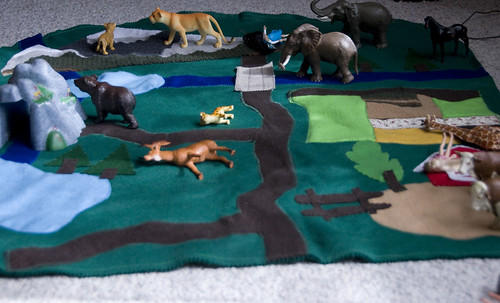