In order to claim your prize you have to email me !

Include in your email: your name, address, and top 3 prize choices (just in case there are duplicate requests – prizes awarded in the order the requests are received).

Where are the prizes?: I have upload prizes onto flickr (set called: Anything Goes in August).

It seems like everybody is posting about Creepy Crawlies these days! Pioneer Woman spent two days on spiders and grasshoppers, buhtafly is killing the son of a guns (getting better with the language, eh?) over at her place, Blondie is writing home for mosquito spray and finding lovely croaking froggies on her bedroom walls in Brazil.

We too seem to have been over run by insects, my front door swarms with mosquitos and now wasps have set up house in the eaves above our front door. My UPS guy says, that it is the bent willow dragonfly I have hanging in a tree in the front yard. He says, it looks like we’re worshiping bugs and I should take in down. If he asks me really nicely, he’s so personable ~ I just might.

The kids found this big ugly spider in their playhouse last night. 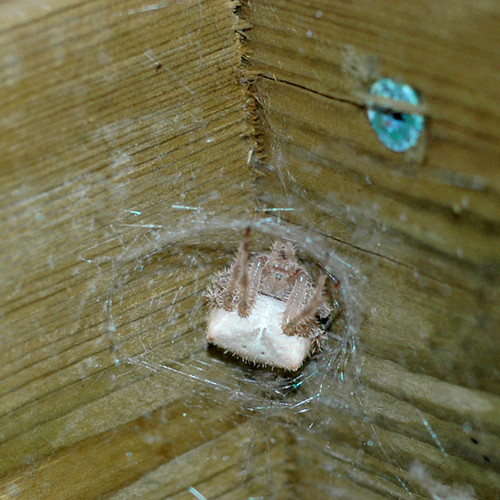 I’m not quite the photographer that Pioneer Woman is but you can see this spider was big … big … BIG, the abdomen is larger than a penny and with it’s legs unfolded were talking QUARTER! The kids managed to dislodge it, bring it in the house and try to make it live in a jar. I made them set if free (it was eating wasps) and now they’re afraid to go near the playhouse.

Sam’s convinced it’s poisonous (might be) and doesn’t want to tempt a fatal bite!

I don’t mind spiders, but snakes scare the heck out of me! I have held the ‘handled sort’ in far away places like Thailand, but if I came upon one in the wild, I’d probably have a heart attack. What gives you the creeps?

To be the next winner (or maybe even win again), you need only leave a comment.

***
EVERY day in August I’m giving away free prizes (maybe more), but at least one. Just like in the past the winners will be randomly drawn and posted here on the site.

The winners will be able to choose one of any of the prizes listed on the flickr set: Anything Goes in August. Once an item is choosen, it will be removed from flickr and will no longer be available (unless I have two … which I do for some).

All you have to do to win each dayâ€™s prize is leave a comment on the most current post.

All prizes are provided by: www.thebabymarketplace.com in conjuction with www.mommyknows.com