Lizzy and Georgia have been gone for a few days for spring break. I’m ashamed to admit it, but mostly I’ve been tending my farm on facebook, putting hits out on thugs that are intent on beating me up in mafia wars, watching TV and just generally being a lazy mug.

Yesterday, I finally decided that, enough was enough and I decided to experiment with waldorf dolls. I love them and they looked relatively simple to make. You know you can find the instructions to pretty much EVERYTHING online right?

This crafters blog had the most detailed instructions on head making. There is a pattern there, but my printer is on the fritz, so I was forced to draw it by hand. Not a big deal … it turned out pretty well. 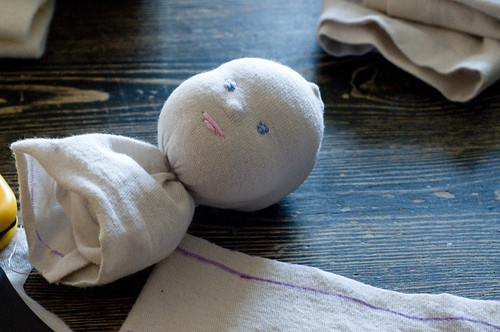 At this stage of the process, I was thinking about Ann Boleyn a lot. I guess it’s the head rolling around on the table. Meet Ann!

I proceeded to make the arms, and body/legs by following the instructions on this site. With no pattern, I had a heck of a time getting the proportions right (I never did). I ended up making two sets of arms. The arms on wee Ann are actually the first set, which I had to scavenge from the garbage. GROSS, I know, but the tee shirt wasn’t that big and I was running out of fabric. I didn’t have much better luck with her body. 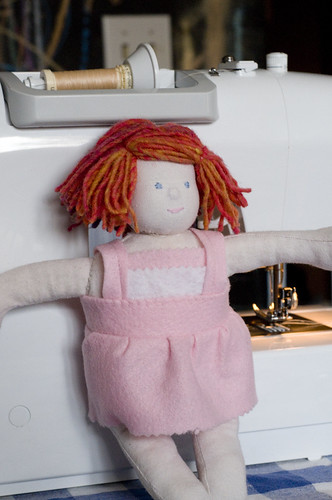 Ann’s a rather pretty girl, unfortunately she’s built like a MAC truck. Look at her torso … why, oh why did I make her so wide? 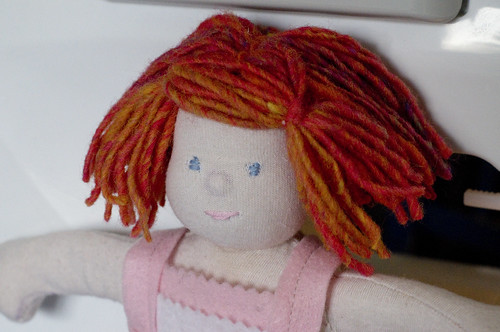 She’s got lovely red hair (I love red hair). It was the only yarn in the house and for that I am happy. I used this doll hair tutorial to create it.

Clothing design, by Mommyknows. Hmmm … let’s just say that I don’t think that I’ll be on Project Runway anytime soon.

Ann was definitely good practice, I hope Georgia likes her, but I won’t hold my breath. I am going to make another, neater, less robust doll, with much more fashionable clothing, just not today.

We’re off to Canmore today to pick up the girls and spend a few days in the Canadian Rockies (one of my favourite places on earth). I am looking forward to taking some long walks and some scenic photos. I hope I have internet while I am gone. If not, I’ll be tweeting my trip, so follow me on twitter.