We arrived home from our Rockie Mountain vacation late last night. I think it was shortly after midnight. Sam had been sleeping, but perked right up when he saw the Shred Sled® waiting on the front step.

We let him open the box before sending him off to bed. He was up and practicing in the dining room before I was out of bed this morning.

By 2 o’clock this afternoon, he was looking like a pro!

Pretty cool, eh? He LOVES it!

I know nothing (NOTHING) about boards of any sort, so I’ll just pass along the details as they were given to me:

The Shred Sled® is the next generation caster board that combines the movements of snowboarding, surfing and skateboarding into one unique sport.

The is the first 4-wheel inline, dual-deck board that makes it smoother and easier for kids and adults to start carving up the streets. Instead of pushing off the board like a regular skateboard, riders use their hips, legs and arms to move the board, similar to movements used to propel surfboards and snowboards. 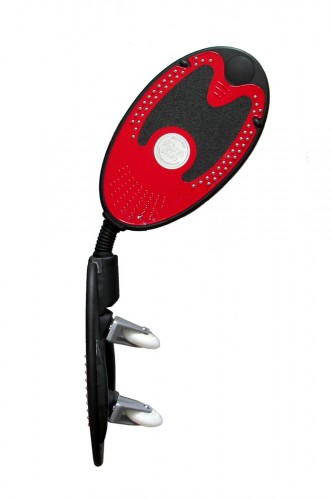 The Shred Sled’s flexible connector allows both decks to rotate around the vertical and horizontal axes so it’s easy to maneuver the board. For better control, each deck has a grip surface to maximize traction and stability while the concave decks make for better foot control.

Disclaimer: I was provided with a Shred Sled for review. Both Sam and my opinions are our own.