Just What is News?

Just in case you aren’t aware, I am a news junkie. My fabulous = me curled up on the couch with pajamas, coffee, BBC / CBC, laptop (because I like to read at the same time) and a cozy throw. Like now!

You’d assume then, that I know what new is, right? Right! Well, you’d be wrong, because I’ve found myself constantly thinking over the past several weeks –> THAT IS NOT NEWS! That is so NOT important! Tell me something that matters!

I am going to assume that CNN knows more about ‘what news is’ than I do. Therefore, I can only assume I know very little about what news is!

Custom made wool coats by J. Crew for the Obama girls, evidently a wise choice of clothing due to it’s affordability to the average American. If that’s accessible, I am a monkey’s uncle. When was the last time J. Crew drew mock-ups and created a one of kind coat for your kid?

I don’t want to know about the Obama’s shopping choices, I want to know about President Obama’s foreign policy choices. The coats are lovely, the girls are lovely, but they aren’t news, are they? It’s not important… it just doesn’t matter. It might deserve a mention on Inauguration Day, to fill in the gaps between star sightings and Bush bashing. I don’t think it deserves repeated airtime 4 days later! Stop it with the stinking coat coverage CNN. I don’t care about the periwinkle wool, the coral/pink combination, the frugal yet stylish satin ribbon ties. Do you?

I do care about the more than 400 children that died in Gaza over the past few weeks. I want to know and understand more about little Samar who was shot in the back at close range by Israelis defense forces. Her family was ordered to leave their home, then while the women and children exited waving a white flag all but Samar and her grandmother (who were both wounded), were shot dead. 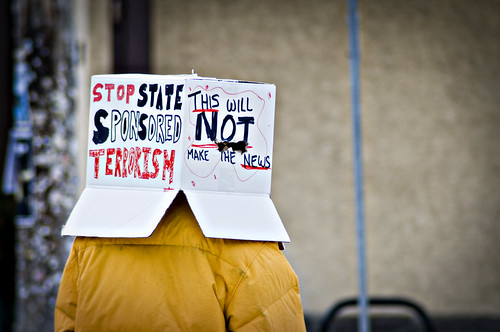 This man stood on the street of Canmore, Alberta on December 31st, 2008 (it was minus -20). He was protesting against Israel’s occupation of Gaza. Notice the right side of the box it reads: This will NOT make the news! Sadly, he was right. I wonder how the rest of the world feels when we talk about ribbons and fashion, and ignore atrocities?

I’ve recently switched to watching the BBC and CBC (Canadian Broadcasting Corporation). They’re not perfect, but they are at least reporting stories of substance … mostly.

Dear Lord, please tell me that things haven’t gotten so terrible that the leader of the free world is going to rely on the smile of a seven year old to guide us into the future! Please!

And CNN … you promise NEWS … it’s time to ‘shit or get off the pot’! –> Sorry Anderson even though you’re hot, I have to move on!